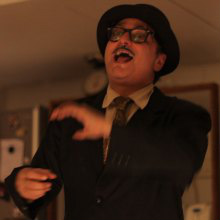 Shakespeare’s king Lear dons the hat of a clown, a lovechild, an abandoned father and a ridiculed man. An unloved, neglected child who tries to reclaim his childhood by being a doting father. To me the play is about an illegitimate child who thinks he is the cause of  misery to his family. He tries to claim acceptance and bring about happiness by choosing to become a jester. Clown, a symbolism of happiness and glee, in the play is an embodiment of grief and sorrow. Grief of a rejected child and an abandoned father. I have seen the play twice and I didn't bat my eyelids even for a moment throughout the 90 minutes of the play on both the occasions. Vinay Pathak does a brilliant job, making the audience split into laughter one moment and reducing them to tears the very next. The way he curses his daughter, just to be filled with overwhelming guilt of cursing his only child, the very next moment.Simply BRILLIANT.” The hand feeds the mouth, the hands feeds on the hand”- This for me was the highlight of the play. Vinay seemed to have this missed this line the second time round.  The audience was quite a dampener on both the occasions, laughing at poignant moments, missing out the underlying message of despair of a heartbroken father.
This is my all time favourite play. It makes me want to sip on that masala chai and go over each line after the play.Every play I go to, I  inadvertently end up comparing it  to this one. Well,Nothing like Lear .Yes sire, nothing like it indeed.
Posted by rb at 10:13