I am feminist. Not those bra burning kinds though. However, I have a problem with how just because a woman writes about sex and her physical desires, the work becomes revolutionary and ahead of the times. I went to see Ismat Apa ke Naam with the very same mindset about Ismat Chughtai's work . But I was gladly surprised. Ismat Chughtai is a lot more than that. Her stories are not just about a women and their sexual desires but about real women, their survival in this patriarchal society and the battles they fight daily.  I am sure a lot of young women, like me, aspire to be the Chanda Kochar and Indra Nooyis of the world. The one's who adorn the front cover of those glossy magazines, the great women achievers of the world. Not taking away any credit from these accomplished ladies, I think the real heroes are the women who earn to keep the kitchen running in their homes, women who deliver babies and are still expected to work on fields the very next day without ever expecting to even be appreciated. Ismat Chugai writes about these women. Her stories may have been written years back but they are relevant even today.


The play is performed in the form of three soliloquies.
Chui Mui

Giving birth to a new life is probably the most beautiful experience for a woman. Unfortunately, in our country, for some women it is nothing less than a nightmare. “Chui Mui” , narrated by Hiba Shah, is a story of a women whose  fulcrum of existence in this world was a male heir. The story trails back to the Mughal era. Married at a tender age into a rich household, she was oblivious to the struggles of life. Her only “duty” was to provide her husband with his successor. Unfortunately, she suffers miscarriage time and again. Her husband threatens to re-marry in case she is not able to fulfill her sole duty towards him. What should have been a little bundle of joy becomes an albatross around her neck. Despite her frail health, she becomes desperate to have a child. The child becomes the bridge between her and a comfortable future. The entire household turns into a fortress so that she can deliver the baby safely this time round but in vain. Her situation is contrasted with that of a lady she meets in a train compartment. This heavily pregnant poor woman flings into the compartment and gives birth without any aid or assistance and probably out of wedlock.  It seemed like life just played the cruelest of its jokes. Tragically, not much has changed since those times. We still continue to be a male child obsessed society. However, the poor pregnant woman was the silver lining of the story. As a woman, to me, she represented the power to challenge the antiquated societal norms. She represented the fact that the power to conceive happiness lies in the womb of freedom of choices and not in muslin wrapped bondages. 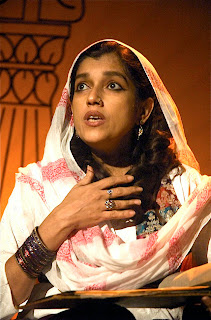 The second story is beautifully contrasted with the first one. It tells how a woman subtly stands her own ground in a patriarchal society without defying the rules of the society. “Mughal bache”, narrated by Ratna Pathak Shah, unfolds the story of a Mughal king and his wife. The Mughal king, unlike the other Mughals, was dark complexioned and deprived of the family good lucks. His complexion earned him the name of Kaale Miyan. Destiny plays another cruel joke on the kingdom-less ruler, and his family fixes his match with an extremely fair girl- Gori Bi. The match becomes the subject of tea time gossip for the family members and Kaale Miyan, the object of ridicule. This makes Kaale Miyan develop an instant dislike for his innocuous bride. The groom lifts his wife's veil on the wedding night.  This was an unsaid tradition in the Mughal household.  Gori Bi, like other girls in the family, grew up listening this. Soon the wedding day arrived and Gori Bi and Kaale Miyan were tied in holy matrimony. On the wedding night, Kaale Miyan, burning with insults of ridicule bought upon him by the conjugal alliance and marred with his own inferiority complex, refuses to lift his bride’s veil and instead asks her to do so. Gori Bi, a woman, literate of her beauty, refused to succumb to her husband’s arrogance. In a battle of egos, the night ends with Kaale Miyan leaving Gori Bi to move to a new place. She spends her entire life sans the bliss matrimony brings along with it. To me, her decision signified strength. In a society and era, where a woman’s identity and right to happiness was tied to her husband, she chose her ideals over them.  During the narration of the story, Ratna Pathak Shah very subtly remarks that she wonders how Gori Bi must have lived her lived her life deprived of the joys of physical intimacy. Ismat Chughtai won me here. I have rarely heard this being even pondered over. A woman’s sexual desires cease to exist in our society. That women just need to be supported financially and emotionally is a myth and it needs to be shattered. In a country, where your morals are linked to the family you are born into, Lajjo, the main protagonist of the story was born into anonymity . Thereby, a wench by birth.  A woman, aware of her beauty, she didn't battle an eye lid while giving into her desires. She is brought to Mirza Sahib to look after his house by one of his friends, much to his reluctance initially. Lajjo looks after the house like she owns it, while shamelessly flirting with Mirza and the neighbours. Lajjo thrives on this attention. Mirza, the “simpleton”, too finally succumbs to Lajjo’s charm and beauty. Insecure of her admirers and shamless flirting ways , Mirza binds her in the chains of matrimony. Marriage wades off Lajjo’s admirers and Mirza, like most of the men, neglects her like a taken commodity. Deprived of adoration, Lajjo begins to resent the covenant of marriage. She decides to break the “sacrosanct bond “which is till date considered to be the sole key to a woman’s happiness in this society to find happiness again. Ironically, for Lajjo , that key closed the door to her happiness instead of opening it. For me, Lajjo embodies the fact, that happiness lies in living the life you choose for yourself and not the life this society chooses for you.

The strength of this play, apart from a well - written script, are its narrators. The beauty and ease with which they adopt and switch between various characters in their stories through subtle nuances make the characters come alive on the stage. This is one play you can't afford to miss.