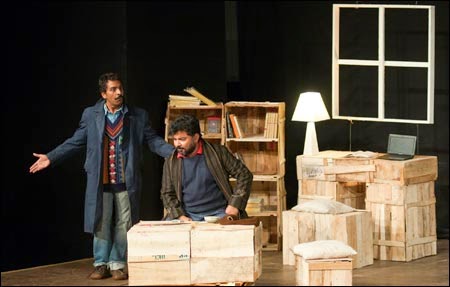 Chinese Coffee is a story of two friends - Yakub and Harvinder (a.k.a Harry). Both Yakub and Harry are in their late forty's and devoid of any success in their respective professions. The play explores their relationship against the backdrop of their personal and professional turmoils.

Harry is a writer . On the wrong side of forty and devoid of any professional success till now, he is working on, probably, his last attempt to make it big in the literary world. Yakub is Harry's friend who quits fashion photography to do "more meaningful " work.

Hard pressed for money, Harry lands up at Yakub's place on a cold Delhi winter night to collect the money he had lent Yakub ages ago. Yakub, who is equally penniless, tells Harry that he has no money to repay him. This leads to a series of arguments between the two protagonists. Amidst this, Harry suddenly remembers that he had left the manuscript of his new book with Yakub. Harry wanted Yakub's opinion on the book before he went to the publishers with it. Yakub staunchly denies having read the book at all (despite having read it) .
As the play progresses. Harry and Yakub  try to find the  "lesser failure" of the two.  Yakub finally accepts that he has read the book and accuses Harry of rummaging though his personal life to write it , thereby, belittling his literary skills as a writer. Yakub even takes a jibe at Harry by saying that had he been a writer, his works would have been far superior than what Harry has ever written. On the other hand, Harry remarks that it's Yakub's jealousy which is preventing him from acknowledging the worth of his new book. Yakub's envy makes Harry revel in triumph. It was as if he had found his book's success in Yakub's jealousy.

The play is an amalgamation of subtle emotions and powerful outbursts of feelings. In my opinion, though Harry was in dire of need money, he didn't really want Yakub to repay his loan. His loan gave him the right to barge into Yakub's house in the middle of the night and pour his heart out. It gave Harry a sense of power over Yakub. Cribbing about his own failures in front of another failed man one gave Harry a kind of comfort zone and a cushion from being judged . On the other hand, though, Yakub was indeed penniless to repay Harry's loan, he wasn't really in a hurry to repay the loan either. He may have asked Harry to leave time and again but he, in fact, wanted to sit back and listen to Harry rant.  Blustering of another non achiever anointed Yakub's own wounds. I think Harry and Yakub tried to find solace in each others failures.

The play has a lot of references to Delhi. I liked the connotations, not because I am jingoist Delhite, but because I think  it creates a personal connect with the audience. It's like breaking that fourth wall to a certain degree. Vrajesh Hirjee as Harry and Danish Hussain as Yakub enacted their respective characters with masterly finesse. The clear diction of the actors (which, unfortunately, lacked in a lot of plays I have seen in the recent past) was absolute erotica for my ears. The play, however, seems a little stretched towards the end. I think a  five to ten minutes trimming of the play would definitely make it more impactful.

I loved the subtle way the insecurities of the characters have been showcased. The actors  tip toed on the thin line between tacit envy and strong outburst of emotions adroitly and overshadowed the script. If for nothing else, go watch this play just  for  Vrajesh Hirjee and Danish Hussain.