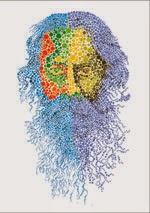 "I have spent my days stringing and unstringing my instrument while the song I came to sing remains unsung or probably, unheard.This defines the relation between Rabindranath Tagore and us - " the lesser mortals". This is because we refuse to see beyond the greatness of Gurudev. Well, for a man who was a poet, novelist,playwright, painter as well as a musician in one lifetime , it isn't tough to understand why. But then, he was also just another man ( which is not necessarily such a bad thing to be). Colorblind is an attempt to introduce the world with this other shade of his life. Shades of the ordinary ,which we have turned a blind eye to. 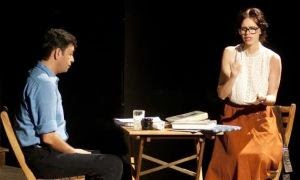 It begins with Kalki doing a research paper on the life of Tagore. She attempts to break away from the usual thesis of glorification of Tagore and his works and discover more about Rabindra, the man. The play oscillates between different time zones. Kalki dons the role of the research student in the present and that of Victoria Ocampo, the Argentinian writer, in the past while Manav Kaul plays a scholar on Tagore and his works and her guide in the present and Tagore in the past. The play also has parallel stories depicting his childhood and his youth. The loss of his mother during his formative years and his yearnings for her . His stoicism over the loss of his two young children. The fact that despite facing so many personal losses, the only way he unleashed his pain and agony was by writing more and more, makes you see Tagore in a very different light.


Tagore stayed on Ocampo's farm in Argentina to recover from his illness on her behest. While Ocampo already admired Tagore's work, he developed feelings for her during his stay. I think the bond between the two was based on the fact that she challenged the intellect in him than just blindly revering him and his works . Ocampo ignited the vulnerabilities of a lover in him in her own ways. The strong , independent woman that she was she refused to accompany him to Santiniketan for she had other things to tend to. He besieged her like an ordinary lover but she stood her ground. This is where the vulnerability in Tagore's characters are showcased. In his planning of meeting her in Europe and writing of letters, the boy caged in his old body comes out. The play also attempts to look beyond the traditionally conceived notion of the platonic relation the two shared, with subtle rawness. The two were in love, in their unique way and the existence of amorousness between the two, doesn't take away the greatness of the man. I like how while demystifying his greatness , the script celebrates the purity of his vulnerabilities.


Towards the fag end of his life, Tagore is shown battling the fear of death like any other ordinary man. The man who celebrated death during his lifetime, succumbs to the charms of the mortal life when death comes knocking on his own door.

You need to see this play to see the veil behind the greatness of the man being lifted and yet see him rise and not fall.
Posted by rb at 02:00